Ma Nature wins that one! Unfortunately, the long weekend did not end quite the way we hoped it would, by getting to perform our COMPLETE show for the first time this season, but, it did prove to be a very long and successful weekend for the drum corps! Many of the members started their journey on Wednesday evening traveling to Bel Air, MD where they participated in 5 parade on the 4th, while the remainder of the corps and some staff members stayed back in New York to participate in some parades there. On Friday we had a full rehearsal block in Williamsport, PA, (Thanks to Laura and Marc Garside for the housing and rehearsal hook up), where we finished the closer and started adding some of the effects planned for this season. Then Saturday, we traveled to Landisville, PA, had an AWESOME, but steamy, rehearsal…then the weather came. It started first with a wind sheer that destroyed our Souvie tent! (Thank goodness members of the admin team were walking by at the time or Mrs. Sauers would have been somewhere on the Jersey shore!) Thanks to both Mr. and Mrs. Sauers for volunteering to brave the potential elements to run the souvie stand, and thank you to Mr. Brien for offering his van to return the souvie stuff back to the trailer on the other side of the campus! As we placed the last bin in the trailer, the rain began. The show was delayed until the lightening passed, and then about 8:15 a meeting of the directors was held to determine whether or not to proceed. We were committed to performing in the rain, especially since our friends, Atlanta CV, made the 800 mile trek north to be in this event, however, after 20 minutes of looking at the radar by the folks responsible for the making the decision, the delay had pushed us back to a point where we couldn’t risk the safety of our members, who had a 2+ hour drive back to our housing in Williamsport, and we made the call to load the truck and get them on their way.

What does that mean for you, our White Saber Nation faithful…that means you need to get to Hornell, NY on Saturday, July 13th where we will be performing at the Maple City Sound, beginning at 7pm. The corps will be there the entire day, so stop by rehearsal if you can, and then the event will begin at 7pm and feature:
Brigs Juice
Mighty St. Joe’s
The Burlington Teen Tour Band
The Hitmen
The Hamburg Kingsmen
The State Champion Hornell Intermediate School Drumline
See the attached ad for ticket information and make plans to be there and be one of the first spectators to see the full show “Becoming Bond.”

Following the Maple City Sounds event, the corps will have a camp weekend to continue to develop the show before heading off to The Parade of Champions in Peckville, PA on July 27th.

As always, THANK YOU for your continued support! 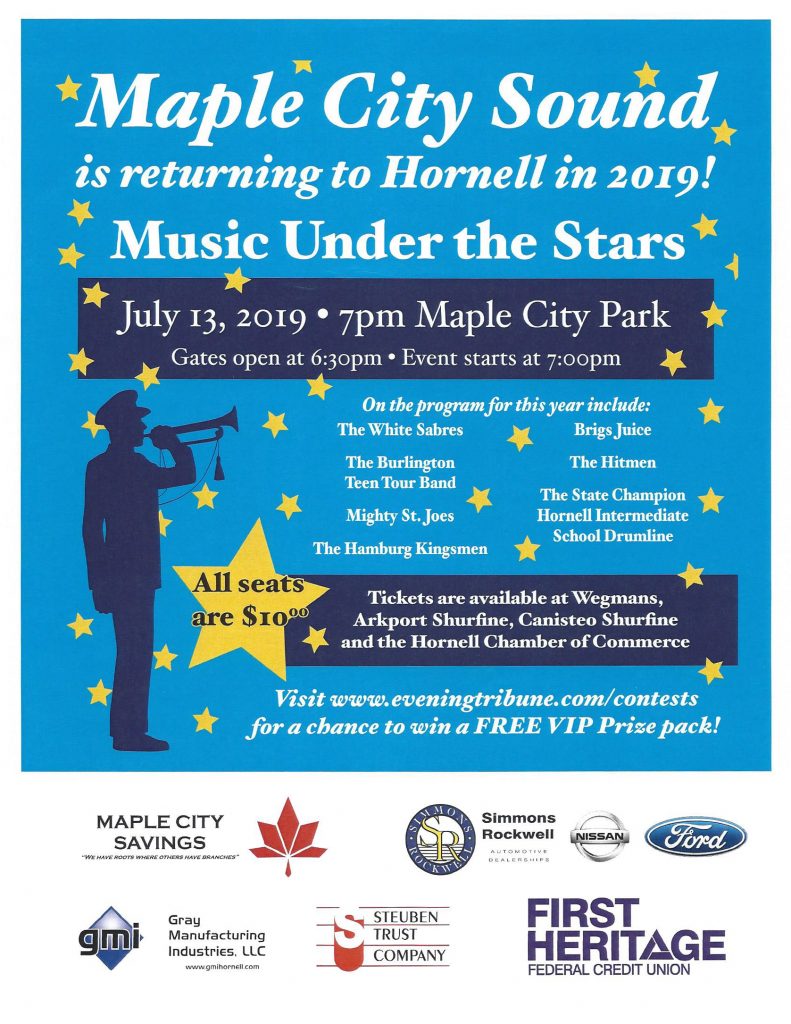