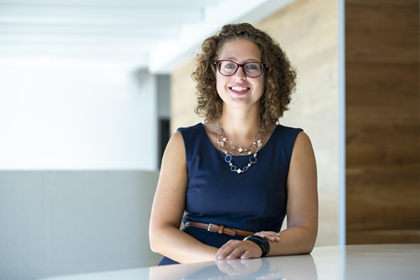 The goal of any marching organization is to promote personal growth within their membership, which makes our next announcement even more special.

To gain a member following their DCI age out, climbing the ranks of your corps; from guard member to staff member is incredible personal growth. Which is why The White Sabers are very excited to announce that Kara Brown is that member who grew into a gifted performer and educator as she will be leading our Color Guard this season!

Kara enjoys passing along her passion for the activity to students and colorguard members of all ages. She has worked with numerous organizations in the upstate NY area, including Gates Chili Colorguard, The Medina Mustang Marching Band, and the White Sabers Drum and Bugle Corps. She started working with the Gates Chili Colorguard organization 8 years ago as an instructor. She works with the parade and field band colorguard, and is acting as the lead instructor & show designer for the JV winterguard for her 4thseason this winter. Kara had the opportunity to work with the Medina Mustang Marching Band this fall, she is proud to have been part of a strong instructional staff that led the band to its NYSFBC championship-winning season. Kara was also on the White Sabers Colorguard staff in the summer of 2019. The White Sabers have been an important part of Kara’s life for the past 5 years and she is excited for the chance to act as the colorguard caption head this season.